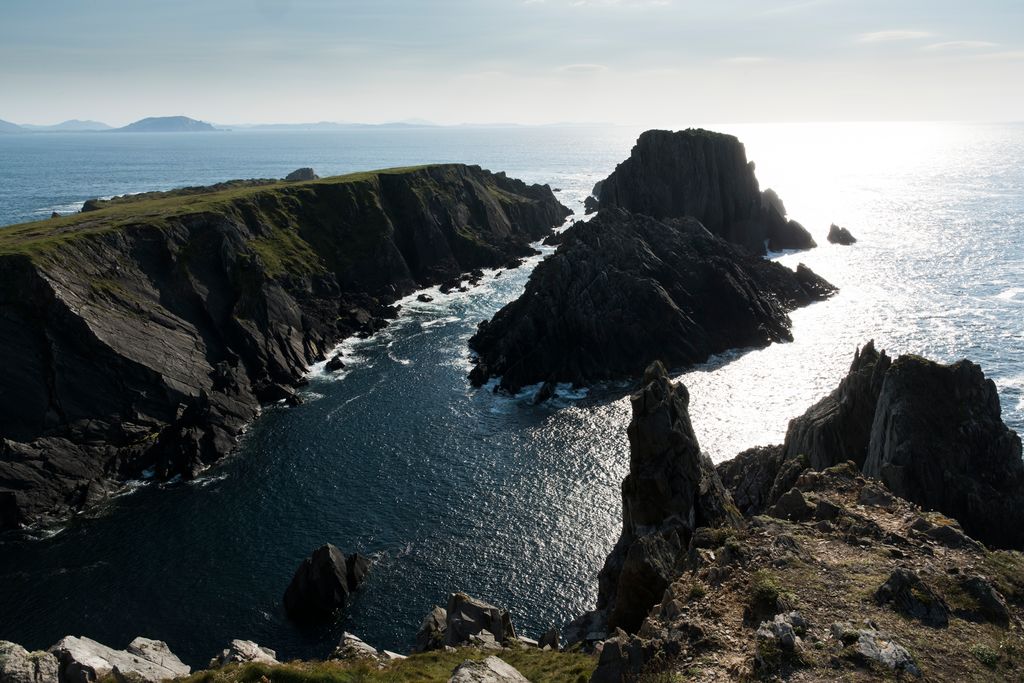 Many a Hollywood location scout has been seduced and inspired by Ireland’s breath-taking scenery and landscapes over the years. From white tipped waves crashing over rocks on Ireland’s west coast, overlooked by towering, jagged cliffs, to the lush and fertile countryside - rolling hills flecked with sheep and yellow gorse, historical monuments and cairns dotted here and there - relics of a distant past.

It is this, otherworldly aesthetic that drew the production team of the two latest films in the Star Wars series to our shores. Skellig Michael was chosen as the location for the planet Ahch To - the homeplace of the reclusive Luke Skywalker in the latest instalments from the iconic series. However, few are aware that filming also took place in several other beautiful locations on Ireland’s west coast, including Malin Head, Loop Head and Ceann Sibeal.

Star Wars production designer Rick Carter stated in an interview that what they were looking for was somewhere “completely from another time and place” and Skellig Michael, a remote island about 12km off the coast of Kerry, was deemed the perfect fit.

It was, in reality, quite difficult to film on the island itself, as it is a protected UNESCO world heritage site, both due to the wildlife that inhabits the island, and in the interests of preserving an ancient religious settlement.

Skellig Michael was home to a Gaelic Christian Monastery between the 6th and 8th century, which is beautifully preserved to this day. The ancient monastery is comprised of six beehive-like stone structures, which prominently feature in the films as the dwelling places of some of the planet’s inhabitants

According to one source, the native wildlife on The Skelligs presented a very real problem to the production team. Digitally removing the many hundreds of Puffins that reside on the island of Skellig Michael would have required much costly and complicated editing work. Rather than commit to this, it was decided to give the Puffins a digital makeover into the indigenous species of Ahch To – Porgs.

Tourists can visit the island by boat tour, depending on weather conditions. The islands are located about 12 km off the coast of Portmagee in South West Kerry. Visitation is strictly limited however, by number of people and to certain times of year.

For those not looking to brave the rough seas to visit Skellig Michael, there are plenty of other spots for Star Wars enthusiasts to explore on drier land…

Due to these strict limitations on visitation and filming time on Skellig Michael, the production team needed to use several alternative locations for additional filming. For this reason, Ceann Sibeal on the Dingle peninsula was chosen as one suitable alternative. The headland is 125km further up the Kerry coastline from Portmagee, close to the charming Gaeltacht town of Ballyferriter.

A replica of the monastic settlement and the familiar beehive huts of Skellig Michael was constructed on the brow of Ceann Sibeal for the duration of filming.

Visitors to the area will also enjoy the magnificent landscapes, white, sandy beaches punctuated by craggy cliffs and secluded coves. It is the perfect location for a scenic walk

Another beautiful spot on the Irish western coastline to spark the interest of the film's producers was Loop Head in Co. Clare. The breath-taking view from the rugged coastline is featured prominently in one of the trailers for the latest film - The Last Jedi.

Visitors to the area might also find Loop Head Lighthouse of interest, which was built in 1894.  Visitors can climb to the top of the 23 metre structure to view the stunning crashing waves of the Atlantic Ocean, and miles of coast stretching all the way to the Cliffs of Moher and beyond. Looking to the water below, seals and dolphins and even whales can be spotted as well as many species of birds nesting on the cliff face.

Another point of interest in the ares, is the famous Keatings Bar, where guests can enjoy a drink knowing they are in the “last bar before New York”.

As filming time on the island of Skellig Michael was so limited, alternative locations were required for additional scenes to be shot. Malin Head, the northern-most point of the island of Ireland, was also chosen as a filming location.

In the weeks leading up to filming, a huge replica of the iconic Millennium Falcon, the starship commanded by Han Solo throughout the original trilogy, was constructed on the cliffs in Malin Head.

Visitors to Malin head will find plenty to do besides ticking another item off their Star Wars bucket lists. The area is steeped in history and is also considered the best place in the country to observe the Northern Lights. Malin Head is located on the Inishowen Peninsula in County Donegal.

6 Exciting Filiming Locations from the iconic Game of Thrones Series

16 Unique Places to Stay on the Wild Atlantic Way

8 Experiences not to miss in Clare