The lush countryside and dramatic landscapes of Ireland have caught the attention of many a film or television location scout over the years with anything from small-budget, independent productions, to big Hollywood blockbusters having been filmed here. Were you aware, for example, that the dramatic cliffs that feature in those chilling scenes in Harry Potter and the Half-Blood Prince are our own Cliffs of Moher? Or that Braveheart, despite being set in Scotland, was mostly filmed on location in County Meath?

One of the biggest films to be released in 2015 was undoubtedly the 7th instalment of the Star Wars movie franchise – The Force Awakens. In this film, set three decades after the Empire's defeat, Stormtrooper defector Finn and spare parts scavenger Rey are caught up in the Resistance's search for the missing Luke Skywalker.

The final scenes of the film were set on Skellig Michael, an island just off the coast of County Kerry, which was made a UNESCO World Heritage Site in 1996. It is the site of Gaelic Christian monastery dating back to sometime between the 6th and 8th centuries. With its rugged ruins and dramatic coastal landscape, it is easy to see why this location was chosen for the film.

This same location was also featured in the 2017 Star Wars Film, The Last Jedi – Episode VIII in the series.

If you would like a close up look at this iconic location, there are various boat tours you can book. 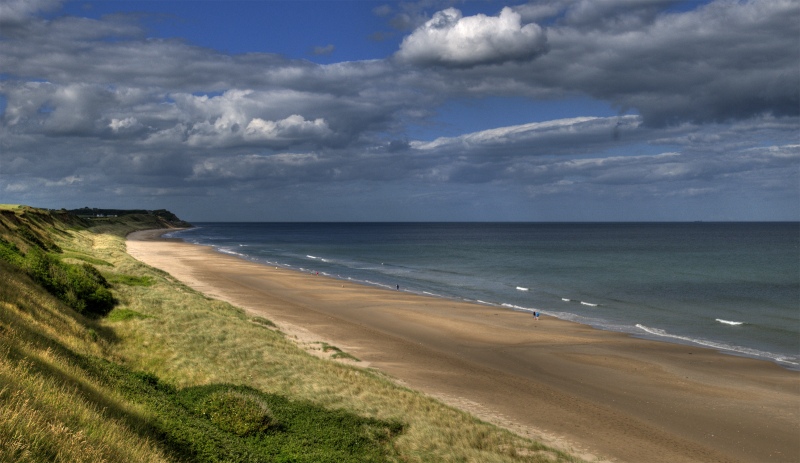 One of the best-loved Irish films, Brooklyn, which is based on the novel of the same name by Colm Tóibín. Set in 1951 and 1952, the film tells the story of a young Irish woman's emigration from her hometown of Enniscorthy to Brooklyn, where she falls in love. When her past catches up with her she must choose between two countries and the lives that exist within them for her.

In addition to Brooklyn, New York, much of the film is filmed in County Wexford, in the village of Enniscorthy as well as a memorable scene on the picturesque the beach in Curracloe. Interestingly, this beach is also used in the award-winning Saving Private Ryan, as the location for Omaha Beach in Normandy, during the D-Day sequence. 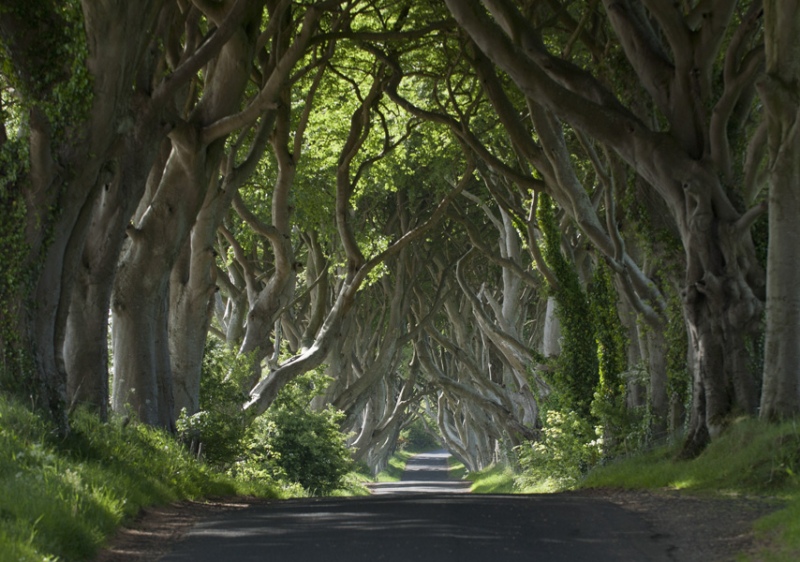 Locations in Ireland: County Antrim, County Down and County Derry/Londonderry

Tollymore Forest Park was the chilling setting for where we first meet the white walkers before they begin their journey south. Much more beautiful and welcoming by day, visitors can explore 600 hectares of Redwoods, ancient ruins and more.

The Dark Hedges in County Antrim provide the backdrop for Arya’s journey along King’s Road.

And if you have ever yearned to visit Winterfell itself, head along to Castle Ward in County Down. For another castle set, visit Shane’s Castle in County Antrim, the location used for the famous jousting tournament from Season 2. 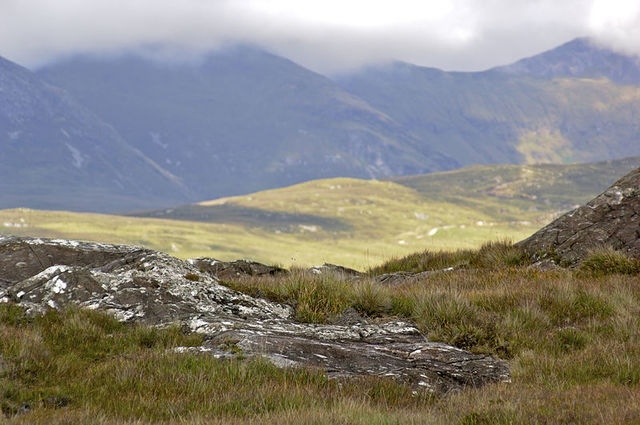 The heart-wrenching film Marley and Me was based on the New York Times Bestselling autobiographical book of the same name by journalist John Grogan.

The film tells the true story of a family and their uncontrollable, boisterous and highly-strung dog Marley. Despite it being an occasionally strained relationship, the dog is loved by the family unconditionally, through thick and thin, joy and ultimately, sorrow.

Although primarily set in the US, several scenes were set in Ireland, when the two main characters, played by Owen Wilson and Jennifer Anniston, take a belated honeymoon in the scenic town of Roundstone in Connemara. 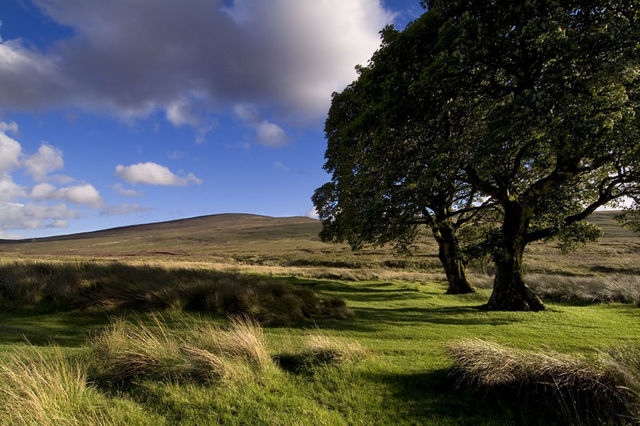 P.S I Love You tells the story of a young woman whose late husband has left her a series of letters to help to guide her through her grief and to start a new life for herself. One of these letters takes Holly from her home in the Manhattan, back to Ireland where she first met her husband ten years before.

The scenes in Ireland are mostly filmed in County Wicklow, including Glendalough, Lacken Village – a small village located on the shores of the Blessington Lakes, and The Sally Gap in the Wicklow Mountains. 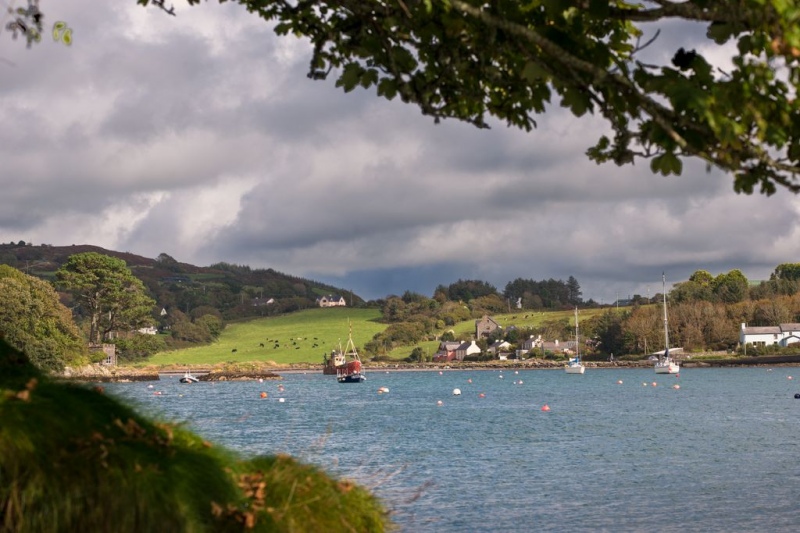 This family classic, from 1994, is set in the 1960s and the story centres around two rural Irish villages and the rivalry between the two, more specifically the rivalry between the juvenile gangs from each village - the Ballys and the Carricks. “The War of the Buttons” refers to the capture of the buttons from enemies clothing and the battles waged to achieve this end. The film is based on the French novel La Guerre des Boutons, written by Louis Pergaud in 1912.

War of the Buttons was filmed on location in County Cork in Castletownshend, Rosscarbery and Skibbereen, all popular tourist attraction due to the numerous historic attractions and monuments as well as the beautiful local coastline and beaches. 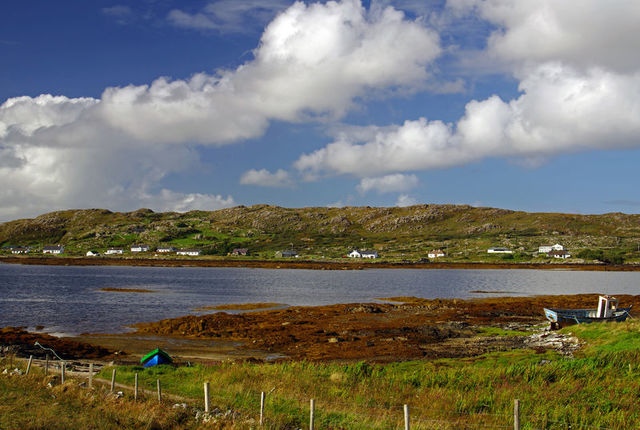 Locations in Ireland: Roundstone, County Galway and Dublin City
Into The West is a story of two young boys whose grandfather gives them a horse he found. The boys keep it in their tower-block flat in Dublin and when the horse is stolen from them the two young boys set out on a magical adventure. They soon learn that Tír na nÓg is not just the name of their horse, as they flee into the West of Ireland. Written by Jim Sheridan and starring Gabriel Byrne and Ellen Barkin.
Roundstone is one of Connemara's oldest villages, built in the 1820s by Scottish engineer Alexander Nimmo. This busy harbour town is set on one of the most beautiful coastal drives in Ireland overlooking the Atlantic Ocean. Roundstone and the surrounding areas are rich in historical and scenic attractions. While swimming and sailing are the most popular activities in this pretty village craft shops, seafood restaurants and local festivals are also catered for.
Dublin city has an abundance of year-round attractions such as the National Museum, Trinity College and the Guinness Storehouse as well as world-renowned architecture, history, festivals and nightlife. There is such much to do in Dublin that you may forget to explore the rest of the country but with this tour, there are plenty more stops along the way.
Blue Book Houses & Hotels nearby: 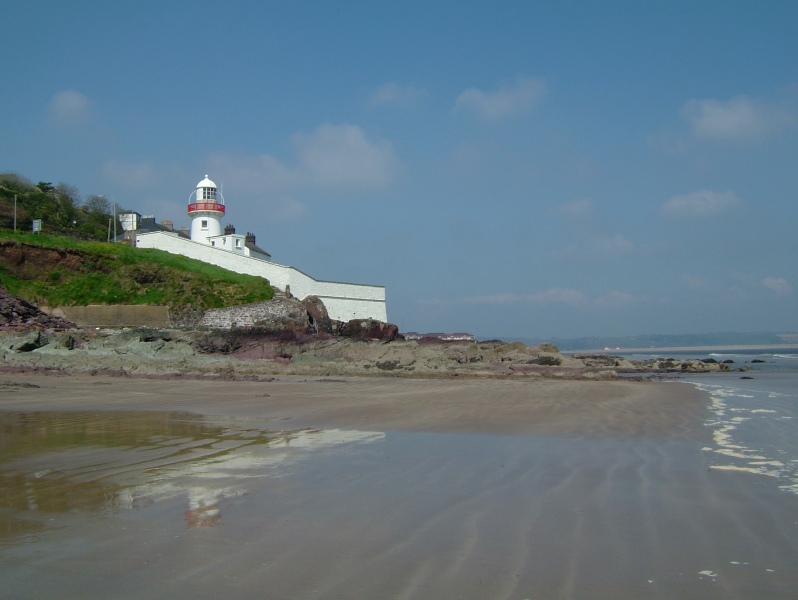 "Call me Ishmael" is the famous opening line from this classic film based on the Herman Melville story and revolves around Captain Ahab and his obsession with a huge whale, Moby Dick. The whale caused the loss of Ahab's leg years before, leaving Ahab to stomp the boards of his ship on a peg leg. Ahab's crazed fixation to kill the whale may cause him to sacrifice everything, including his life, the lives of his crew members, and even his ship to find and destroy his nemesis.

Youghal is a Heritage Town situated in the south-east of County Cork. This ancient "Historic Walled Port" nestling at the mouth of the magnificent Blackwater River began as the 5th-century monastic settlement of Saint Coran. The town had many trials and tribulations over the 16th and 17th centuries, taken and looted by the Geraldines and retaken for the crown by the Earl of Ormond. During the civil war, it was fought over by the Royalists and Parliamentarians. So with this rich history, the town has many historic buildings from the medieval era and its streets follow the layout of the medieval town. Youghal is also a family-friendly town with plenty of activities no matter what the weather may be. 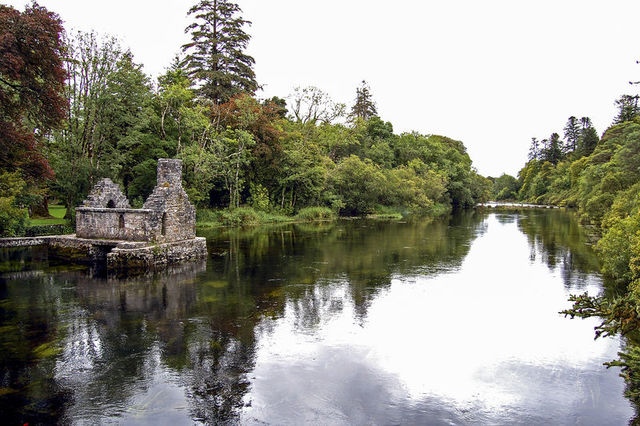 The Quiet Man, directed by John Ford and starring John Wayne and Maureen O’Hara, is a well-known classic comedy-drama that won two Oscars in 1953, for Best Cinematography and Best Director (John Ford)

The film tells the story of Sean Thornton, who returns from America to reclaim his family’s farm in Ireland. Sean's eye is caught by Mary Kate Danaher, a beautiful but poor woman, and younger sister of ill-tempered landowner "Red" Will Danaher. The tumultuous relationship that forms between Sean and Mary Kate, punctuated by Will's pugnacious attempts to keep them apart, forms the main plot, with Sean's past forming a dark undercurrent.

Cong is a beautiful and charming village located in the West of Ireland, where visitors can follow in the footsteps of the actors from The Quiet Man by visiting an exact replica of 'White-o-Mornin' Cottage, reliving the river fight scene and dropping by Pat Cohan's bar. In addition to its fame as the filming location of The Quiet Man, Cong is also home to the ruined Medieval Abbey of Cong, where the last King of Ireland - Rory O'Connor, is buried. 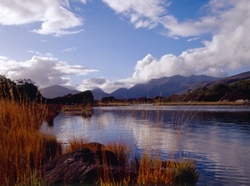 The Lad from Old Ireland is regarded by some as the first American-produced fiction film made in Ireland.

This film tells the story of a boy from Ireland who leaves for America to make a new life for himself. However, he is never able to forget the poverty that he left behind. After achieving considerable success in his adopted country, he returns to Ireland to rescue his sweetheart.

It is said that The Lad from Old Ireland was the first American-produced fictional film to be made outside of the USA (Sight and Sound, Oct-Nov 1953:96). In August 1910, the Kalem Company of New York City sent director Sidney Olcott (who also stars in the movie) and a film crew to Ireland. Many of the actors cast in the film were Irish and the scenes provide an authentic depiction of Ireland at that time.

It easy to see why the Kalem Company chose Kerry as their location for this film. County Kerry is located in the South West of Ireland and is renowned for its dramatic scenery including iconic mountain passes and the rugged Atlantic coastline.

Blue Book houses and hotels nearby: